60-year-old Simon loves horses and had dreamt of having the opportunity to work with them ever since spending time volunteering at a stable. With the support of the Inclusive Employment team at ECL, Simon has now been able to secure a paid role at a local livery yard and looks forward to going to work each week. 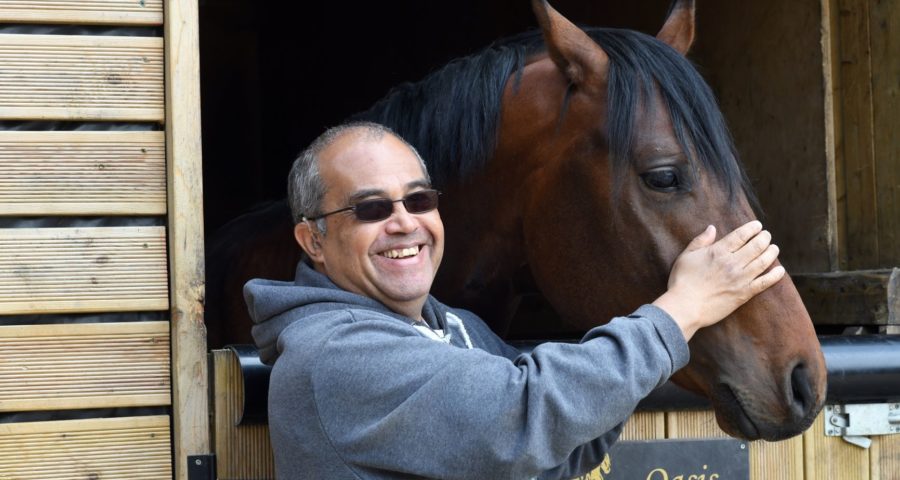 “I have always been told that I worry too much but finding a job has been really good for me. I look forward to going every week and when I get home, I reflect on all the things I have achieved that day. I feel proud of myself.” Simon.

Having attended ECL’s day service in Basildon four days a week for the past 34 years Simon, who has mild learning difficulties, had grown to love his routine and really enjoyed his regular visits. He had never expressed much interest in gaining paid employment, although the inclusive employment team were aware that he had previously taken on a voluntary position at a stable. They were confident that he would have a lot to offer and a lot

to gain if they could just match him with the right employer.

The outbreak of Covid-19 led to an enforced change of schedule for Simon, as lockdowns meant that he was no longer able to attend the day service as usual. With his routine interrupted and time on his hands, his Inclusive Employment Consultant (IEC) Lauren encouraged him to consider applying for a job, promising him that she would focus on finding him something that involved working with horses. The mention of horses seemingly did the trick and Simon decided he would be willing to put his anxieties aside and give it a go.

Through ECL’s network the team were able to find Jane, the owner of a local, family-run stable who loved the idea of being able to offer employment to someone with a learning disability. Jane had a roster of jobs which she found herself struggling to find time for, so she set Simon up with a trial shift to see how he got on. With the support of his IEC, Simon quickly felt at ease and Jane was delighted with his standard of work. Her concerns that the tasks she needed help with might not be exciting enough evaporated, as it was clear Simon found the work both therapeutic and rewarding. He was offered a paid job there and then and has been diligently attending regular shifts since September 2020!

“I have always been told that I worry too much but finding a job has been really good for me. I look forward to going every week and when I get home, I reflect on all the things I have achieved that day. I feel proud of myself” says Simon.

Lauren’s support has been invaluable in making the transition as smooth as possible - from helping with the preparation of a CV and joining Simon on his work trial, to offering help with travel and being by his side on his first few days to provide on-the-job coaching. Although Simon’s confidence has grown enormously and he now feels able to work independently, Lauren still checks in after every shift so that he can tell her all about his day.

Simon’s IEC, Lauren says: “I am incredibly proud of Simon’s positive approach - this role is the ideal match for him, and I know that he enjoys every second. It’s not just Simon who benefits though, Jane has been so impressed that she’s decided to take on another of ECL’s Inclusive Employment candidates and that is all down to the fantastic impression Simon has made!”

Ground-breaking project to help adults with learning disabilities and autism to achieve their aspirations of paid employment.